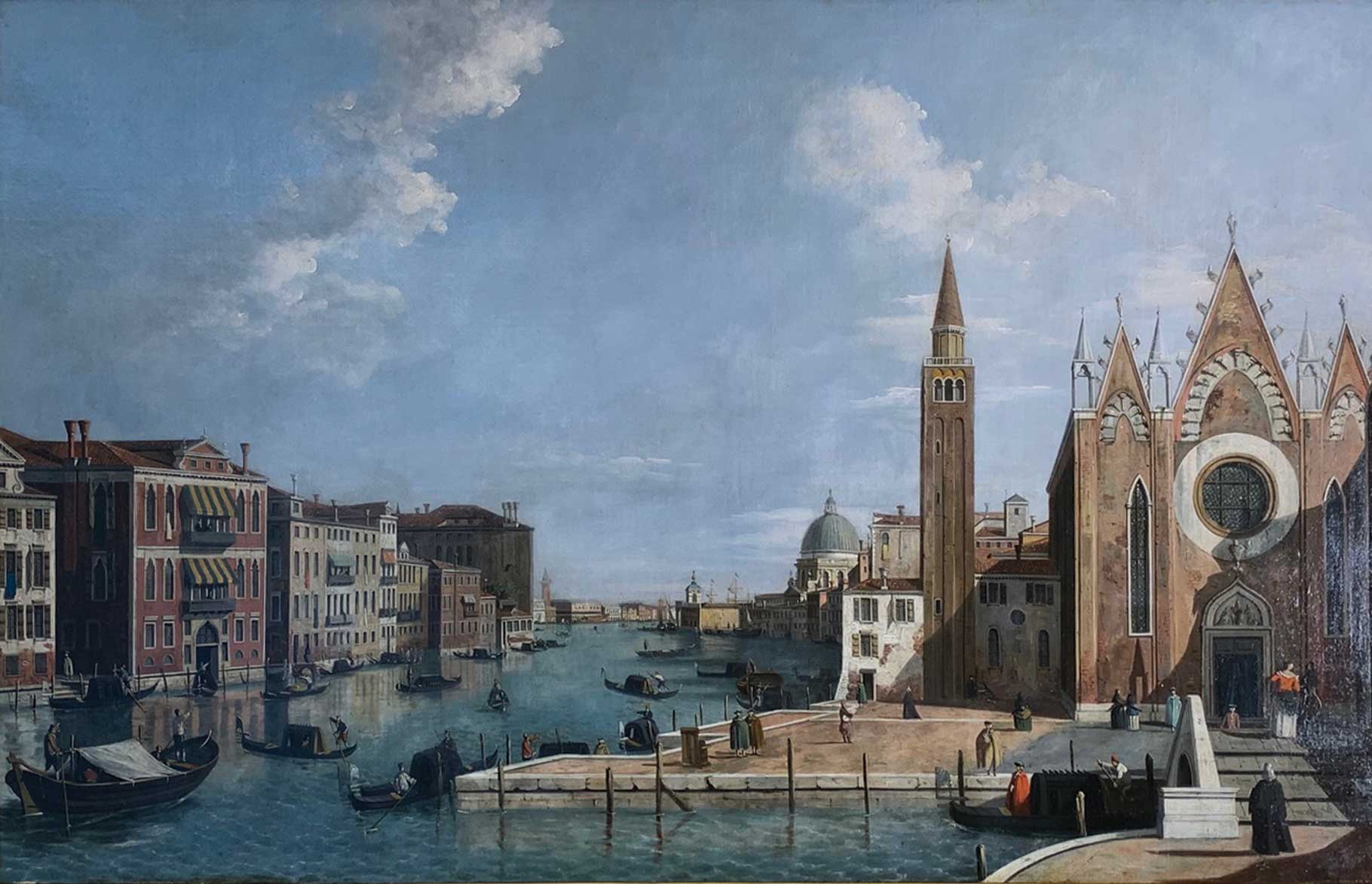 This bright Venetian scene is a copy after Canaletto, who originally produced the oil painting during the 1730s as part of twelve views of the Grand Canal.

‘The Grand Canal looking East from the Carità towards the Bacino’ by Canaletto was first connected to Joseph Smith, a prolific patron of the artist before it was later acquired by King George III. The painting still resides as part of the Royal Collection Trust.

This scene is notable for its depiction of the Santa Maria della Carità and the adjacent Scuola Grande della Carità, which casts a shadow over the church and pavement from the right. The medieval church of Santa Maria della Carità, which was reconstructed in the 1440s, can also be seen in Canaletto’s early work The Stonemason’s Yard (1725). The buildings still exist today, unaccompanied by the bell tower which collapsed in 1744.

This remarkable copy has subtle but interesting differences. In either a need for symmetry or a romantic notion, the artist has replaced the statues on the 3 points of the church. In Canaletto’s original depiction of this scene, only one of the statues remains as the religious complex is in a state of disrepair.

There is still a hint towards this decay with the open brickwork appearing beneath lost stucco, but overall the artist creates a busier, thriving depiction of the Venician area. This can be seen in the inclusion of a nobleman passing under the bridge on his gondola, as well as more activity in the canal and a further procession of people heading into the church.

In a further attempt to artistically balance the painting, the copy makes geographical changes to the city in the horizon of the piece. Canaletto’s original work portrays a domed church and two towers in the distance, whilst this piece recreates the central bell tower upon the opposite bank. This parallel effort supports the balanced essence of the artwork, which is engaged with the delicately mirrored reflections of canal waters.

As a well-known follower of the artist, this piece can be linked with William James, who worked as a studio assistant for Canaletto during his London residency. In this context, it is possible that this copy may have acted as a study in perspectives for the young artist, who has included more figures at different depths to experiment with an important artistic skill.

This contemporary follower of Canaletto is highly likely to be William James, who exhibited at Spring Gardens from 1761-1768 and the Royal Academy 1769-1771.

Canaletto found huge success in the sale of his artworks to English tourists who were visiting Venice during their fashionable grand tour of Europe. In the 1740s conflict in Austria reduced the number of his patrons, and so in seeking further business opportunities the renowned Italian artist moved his studio to London.

It is well documented that Canaletto lived on Beak Street in the Soho district of London between 1749-1752. During this time there is evidence of William James living on the same street and working as a studio assistant to the artist.

William James was a devout follower of Canaletto and admired his master’s works, resulting in an impressive series of copies after the artist. Although James never visited Venice, his repeated scenes of the Grand Canal and Venetian life have a quality to them which surpass a mere copy of the original. It is noted that William James brought his own impressionistic style to the work, with an eye for detail and depth of artistic skill.

Like Canaletto, William James also produced scenes of London with a focus on the River Thames which are reflective of the dominance of Venetian canals, from which the artist grew his talent.

As an artist in his own right, William James exhibited oil paintings with similar themes of architectural beauty and commercially favourable views of celebrated tourist sights.

Works exhibited at the Royal Academy:

His works are housed in galleries around the United Kingdom, including those at Victoria and Albert Museum, Hampton Court and Oxford University.