During our conservation work throughout the United Kingdom, we often find ourselves in ecclesiastical settings such as historic churches and abbeys. The collections of art and items residing in these centuries-old establishments may be suffering in their own old age, as well as facing dangers from their years spent in candle-lit, similarly antique atmospheres. Our conservators step in to help revive and preserve important pieces, allowing them to be appreciated in their best condition for the public and those who reflect on them in daily worship. 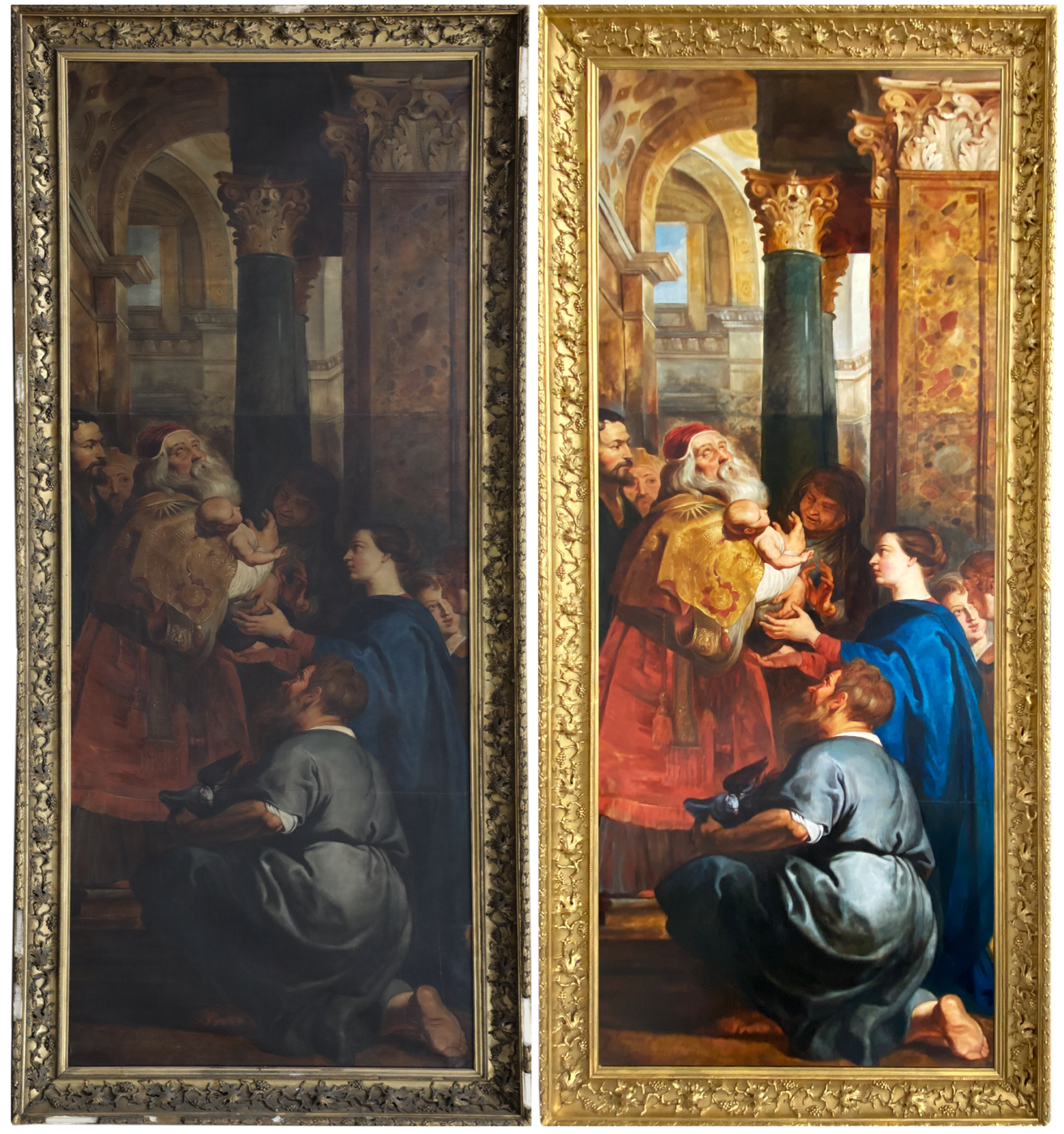 In 2022 we were contacted by Saint Michael’s Abbey in Farnborough, a monastic community about thirty miles from London. They were concerned about two altarpiece paintings, copies of a famous triptych by Rubens that resides in Antwerp. The grand 14ft by 5ft artworks and their detailed golden frames had become heavily discoloured by smoke, debris, dust and historic deterioration, hiding their vivid colours as well as artistic and religious impact. Our team helped to remove, transport, clean and fully restore both altarpiece paintings, with remarkable results.

The history and interpretation of the altarpiece paintings

Peter Paul Rubens is known for his extensive and dramatic oil paintings depicting biblical and allegorical scenes. Like many Old Masters, Ruben’s grand artworks were commissioned by royalty, aristocracy, or particular groups of patrons with a charitable cause. This was the case for a triptych for the Cathedral of Our Lady in Antwerp, commissioned by the Confraternity of the Arquebusiers in 1611. The centrepiece depicts The Descent from the Cross, whilst the two side panels show scenes from the early life of Christ from the Gospel of Luke. This theme is in contrast to a Rubens triptych depicting The Elevation of the Cross, commissioned around the same time for the neighbouring Church of St. Walburga in Antwerp.

Above: the original Rubens altarpiece painting as it appears in Antwerp cathedral and a detail from The Descent from the Cross

The Descent from the Cross triptych is strongly influenced by Venetian masters, such as Federico Barocci and Daniele da Volterra, with the use of light and dark reminiscent of Caravaggio. As well as the dramatic centre depicting Christ being lifted away from the crucifix in death, two side panels offer far less macabre scenes.

Above: details from The Visitation panel of the original triptych

The left panel is The Visitation, a popular topic in Christian art, reflecting on the moment Mary, then pregnant with Jesus, visits Elizabeth who is pregnant with John the Baptist, as told in the Gospel of Luke 1:39–56. Ruben’s composition shows Mary in attire associated with pilgrims, behind her a figure looks towards the viewer knowingly, as if you – the pilgrim – have also travelled to meet with Elizabeth. This would have been a purposeful connection for the many Christian pilgrims expected to travel to the Cathedral in the 17th century.

Above: details from The Visitation featuring symbolic animals and surroundings – before and after restoration in our studio

Beneath the classical portico, chickens, a rooster and a peacock can be seen – these have specific meanings behind them. The chickens are symbolic of material love and fertility, the rooster is symbolic of resurrection, and the peacock is a sign of eternal life. Behind them, we see another man in typical pilgrim attire heading away from the scene, adding to the lifelike motion of events. The dog between Mary and Elizabeth’s feet is also a sign of loyalty, whilst the ivy growing above is also an allegory of immortality and fidelity.

Above: details from The Presentation panel of the original triptych

The right panel takes place after the birth of Christ, depicting The Presentation of Jesus at the Temple. This day is still celebrated 40 days after Christmas to commemorate the event, as told in the Gospel of Luke 2:22–40. The story comes from the Jewish devotion of Mary and Joseph, who travel to the temple for Mary’s ritual purification after childbirth, as well as to perform ‘the redemption of the firstborn son’. As they were poor, Joseph sacrifices two turtle doves rather than a lamb – in this painting you can see them gripped in his hands. Whilst visiting the temple, Mary and Joseph meet an elderly, devout man named Simeon who has been promised that ‘he should not see death before he had seen the Lord’s Christ’, and upon seeing Jesus he prophesies his future and recites the Nunc Dimittis prayer.

Above: a detail from The Presentation restoration – before and after surface cleaning and varnish removal

In The Presentation painting, Simeon looks toward heaven as he speaks, holding the infant Christ – together their arms form a cross. Jesus is in the centre of the scene, bathed in light and the rich fabric of Simeon’s robes, looking towards his mother. Behind them, in a dark cloak, we can also see Anna the prophetess who offers prayers to Jesus. The classical architecture and marble create an idealised, explicitly magnificent setting, these are baroque ideas about rich visual and artistic emphasis as a means of religious devotion.

Above: the contrasting triptych depicting The Elevation of the Cross by Rubens

Above: views of Farnborough Abbey in Hampshire

Numerous copies would have been made of these masterpieces, by professional and amateur artists over the centuries since Rubens composed them. Two well-accomplished copies made their way to Farnborough, where they resided in Saint Michael’s Abbey until our team stepped in to restore them. The abbey has been home to Benedictine monks since 1895, and like the original Rubens, the paintings had a link to Napoleonic France. The abbey was built by Empress Eugénie following the death of her husband Napoleon III and her son – it was designed as a monastery and imperial mausoleum in exile.

Above: the copy in Farnborough Abbey is a well-accomplished study of the original Rubens composition

The restoration of the triptych panels

The altarpiece paintings measured an astonishing 14ft by 5ft and were displayed in ornate frames. Both the oil paintings and the frame were covered in a thick layer of dust, soot and smoke from the atmosphere. This is not only visually distracting but highly toxic, leading to further deterioration and distress. After arranging the removal and transport of these large paintings with professional precision, they arrived in our studio to be assessed and a treatment plan was put together.

Above: areas of surface cleaning that have been tested for sensitivity

The first stage of the restoration process was a surface clean, removing any dust, dirt and soot that sat on top of the varnish layer. A surface clean on an average-sized painting can take a few hours due to the swabbing process that a conservator needs to use, in order to prevent dirt from moving across the painting only an inch or so is removed at a time.

On two 14ft paintings, this process required more than one conservator to ensure the entire surface was clear and ready for the next stage in good time. To achieve this, our studio worked alongside conservation students from Northumbria University who were on a professional internship programme as part of their studies. Overall, surface cleaning took around two to three weeks as the restoration progressed. The frames were also cleaned, as the crevices held onto thick layers of toxic smoke particles and atmospheric debris.

The next step was the varnish removal, this is more intensive as it requires a unique solution that is tailored to the needs of the painting and the materials used. This also required a swabbing technique, gently clearing away the perishing varnish inch by inch. As well as the surface dirt, much of the discolouration was due to the old varnish deteriorating and absorbing environmental particles such as smoke.

Traditional varnish is botanical, meaning it decays and yellows over time – this is worsened if it has been in contact with other elements such as soot, nicotine or high levels of atmospheric dirt. After another three weeks, the varnish removal was complete and the original colours of the paintings were finally on display again for the first time in decades, perhaps even centuries.

Above: the monks from Farnborough Abbey came to see the restoration in progress and learn about conservation techniques

It was during the varnish removal that some of the monks from St Michael’s Abbey came to visit our studio. Our conservators explained the techniques that they use and taught the monks how to do a little themselves. We were glad to be able to share the restoration process with them, as these paintings are such an important part of their history.

Now that the paintings were clean and returned to their original colour, our team of conservators prepared them for a new layer of UV-protective, non-yellowing varnish. As the artworks were so large, this was completed by spraying the layer evenly rather than manually applying it with a brush.

Above: the abbey preparing to display the paintings following the restoration, the windows and walls of the abbey were also cleaned and restored

The frames were also fully cleansed from any debris, missing or broken decorative features were perfectly recreated and the gilding was reapplied by our framing experts. The frames were reunited with the altarpiece paintings before they were safely transported back to the abbey. 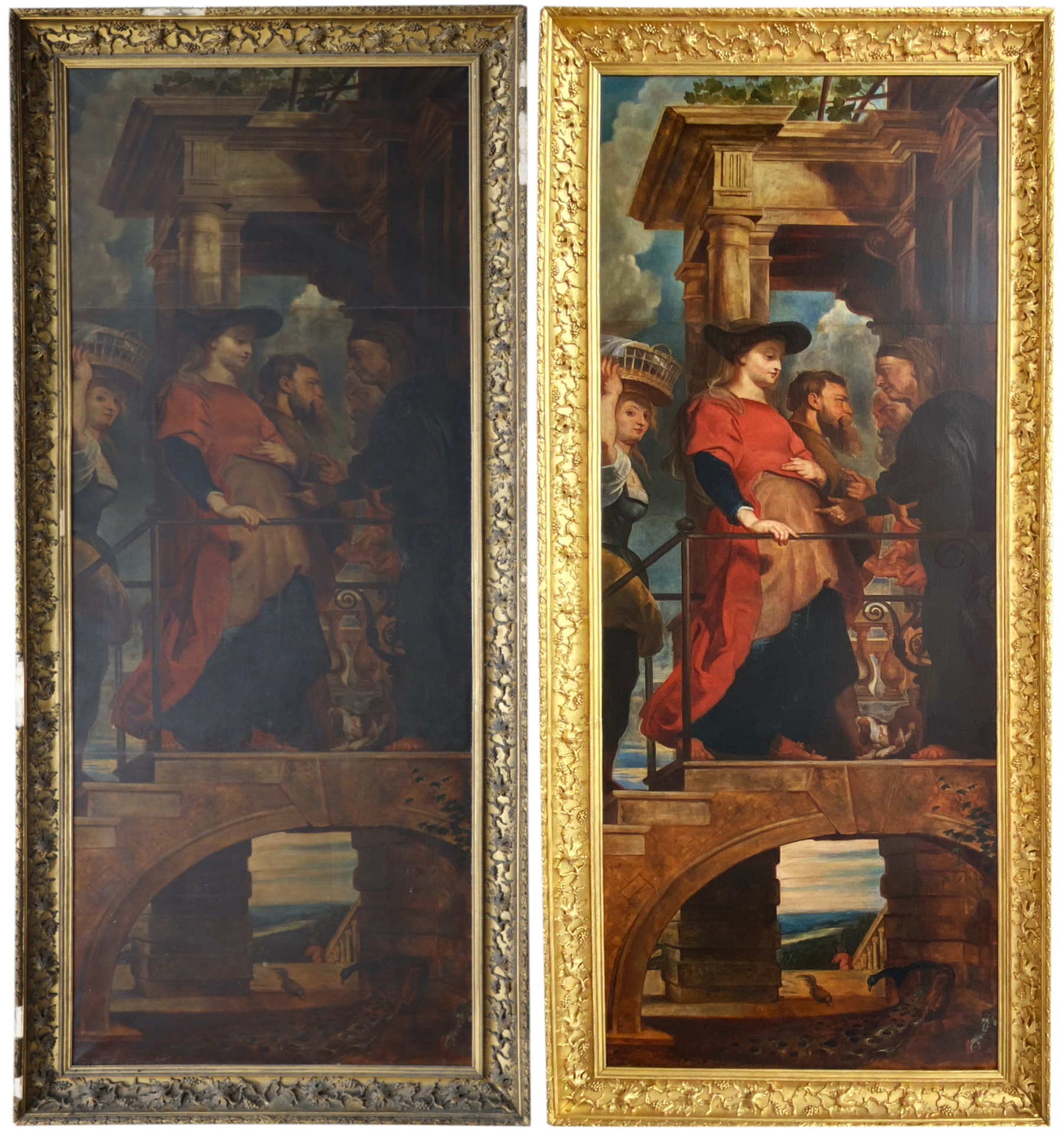 If you have a large oil painting in need of restoration or require guidance on the care of altarpiece paintings and artworks in a religious setting such as a church or abbey, please contact our helpful team for further advice.

Please get in touch by emailing [email protected] or call 0207 112 7576 for swift advice and a conversation about our services.