For all of us, 2020 has been an unusual and unpredictable year. Our team at Fine Art Restoration Company has been fortunate to have been working throughout the pandemic, never stopping to bring life back to the artwork which means so much to us as we find ourselves staying at home, where we are appreciating it more than ever before.

We came together to collate our favourite restorations of 2020 to celebrate achievements in conservation, as well as to reflect and document the more unique and eclectic items that we have entrusted to work on during lockdown.

Our team thank you for your support and collaboration throughout 2020. We hope that you have a wonderful Christmas and a happy new year.

A grand 19th century painting named ‘The Sale Of A Heart’ came to us for extensive restoration work and the results were remarkable. The artist was Michael Frederick Halliday, one of the earliest members of the Pre-Raphaelites. He had used unusual pigments in some areas, making this a uniquely challenging piece for our paintings conservator.

Earlier in the year, we were contacted by a school who had a portrait defaced by a ball of wet tissue. The gentleman sitter did not look impressed at all by this, and so our team worked for a seamless restoration of this damaged area. He went back to school shortly afterwards, to look over his pupils once again, as good as new.

A painting which had been in a family for decades came to us for restoration. The discoloured artwork had been rumoured to be a piece by Tintoretto. As our conservator cleaned the oil painting of centuries worth of debris and staining, we could see the details which were typical of an ‘old masters’ artwork. As well as the painting, our framing conservator also restored the gilded frame. The stunning results certainly convinced us that the rumours could be true.

Just before Halloween, our team in the Carlisle studio revealed a skull which had been painted over in the past. Possibly because it was seen as too macabre or irreverent, or because it had an unusual scale, this memento mori detail was a unique find and returned the oil painting to its original artistic intention just in time for the spooky season.

A detailed Victorian frame came to our Carlisle studio with major damage to its most decorative area, a small crown which sat above the print of Queen Victoria and her extended family. Our frames conservator re-stabilised the structure, before recreating the missing elements of the royal feature with artistic and historical accuracy.

When this treasured mask faced accidental damage at home, our ceramics conservator was able to seamlessly restore it. The result of the restoration was so flawless that our client asked in disbelief whether it was really her piece and whether we had somehow replaced it with a new one! There were smiles all round, including on the face of this much-loved terracotta piece.

March Of The Penguin 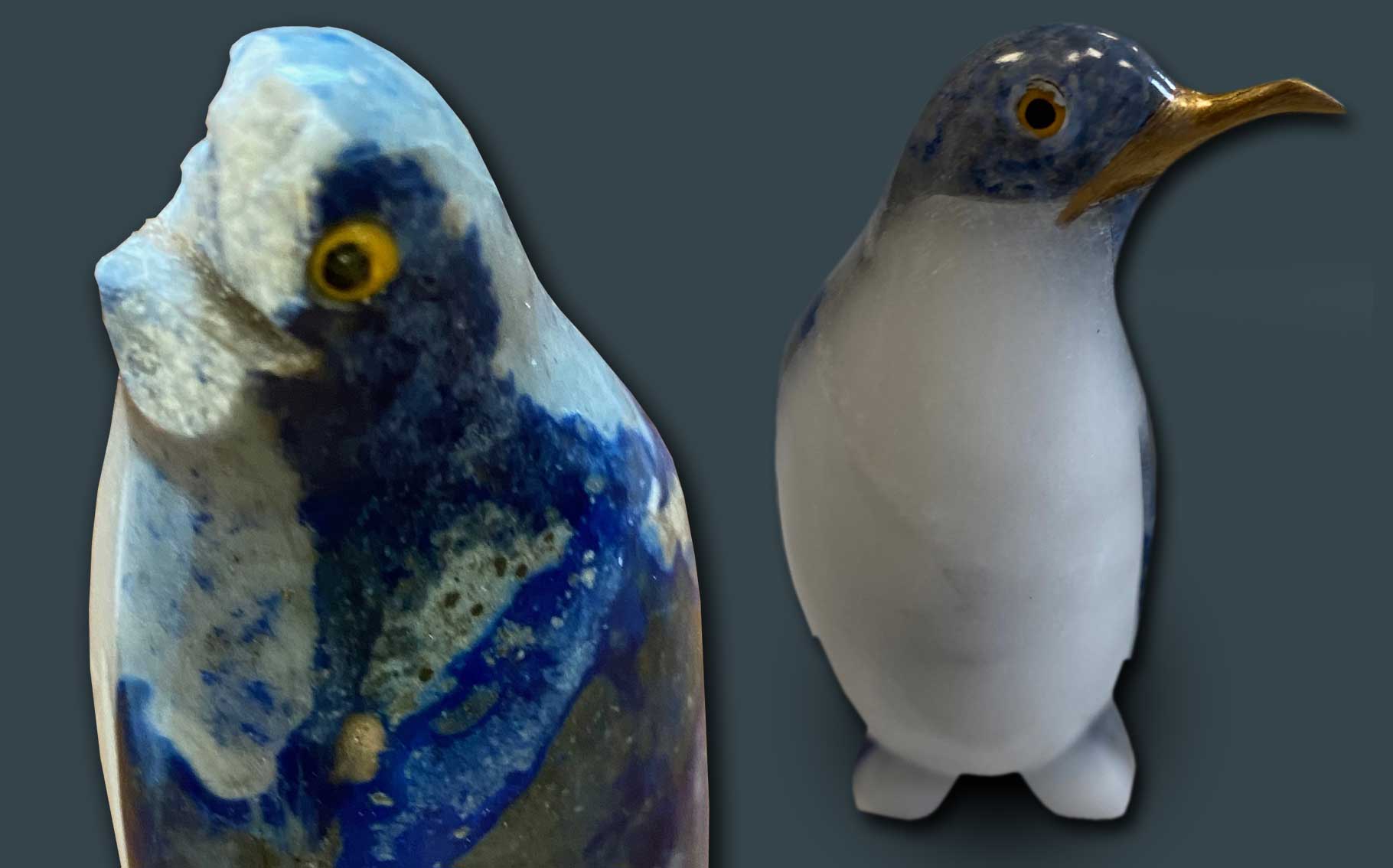 This sweet penguin ceramic had been badly damaged, losing its part of his face and detailing. Luckily, some of the small broken pieces had been saved for reattachment and our ceramics conservator is skilled at recreating any missing areas. He now stands proudly again, with his gilded beak held high.

After a lifetime of collecting autographs from not only the main cast and crew of Star Wars but all of the people who have worked on the franchise from unnamed stormtroopers to cameramen, disaster struck this admirable piece of collectors memorabilia. A final autograph was needed from none other than Harrison Ford, but when it returned from the long journey to Hollywood part of the poster had been ripped away and stolen. Our skilled paper conservator was able to digitally reproduce the missing area and seamlessly reattach it. This means that the stability of the poster has been preserved and the paper is ready to recollect the missing autographs of the sci-fi saga.

This grand map is printed after one of the earliest English maps of North America by John Senex and notably one of the most detailed, it is the earliest to give an accurate depiction of the Mississippi River. The map had not been cleaned for over 50 years and our client was amazed by the clear and crisp results which allowed the original colours of the map to come through.

This special army cap was restored by our textiles conservator, preserving it for future generations. The cap belonged to a member of the 17th/21st Lancers, a cavalry regiment of the British Army which was formed between the world wars. The skull and crossbones were reattached and the areas of deterioration were restored.

A series of several masonic tracing boards came to us for restoration from the Lamb & Lion Lodge which was founded in 1789. These boards had heavy staining which took a long time to remove, making it a challenging project for our paintings conservators. The end results show a true rejuvenation to these detailed and unusual artworks.

This wonderful papier-mâché tiger came to Fine Art Restoration Company at the start of 2020, you can read a full case study about the restoration process here. The nose of the tiger had been chewed away by our client’s new puppy and so we stepped in to make this grand beast complete again.