In churches, manor houses and museums across the United Kingdom you may come across heraldic paintings with an antiquated yet fascinating purpose. Often ignored or simply blending in with the backdrop of a historic setting, funerary hatchments once served an important role in the mourning and remembrance of dead noblemen and women. The symbolism of these artworks tells us precisely about the family of the deceased through the knowledgeable use of coats of arms and colour.

Above: our conservator working on a funerary catchment in need of conservation

Our studio has seen numerous funerary hatchments in need of professional conservation, suffering from typical issues found on antique paintings such as discoloured surfaces, cracking paint, rusting metal tacks, rotting frames and a disturbed canvas or panel. This article will look at the history and interpretation of funerary hatchments, as well as tips on their care and professional restoration.

Above: examples of funerary hatchments from across the United Kingdom

What is a funerary hatchment?

A funerary hatchment is a painting traditionally commissioned following the death of a wealthy land owner, nobility or royalty. The word hatchment is the historic term for ‘achievement’ so these artworks translate as the achievements of the dead, displaying their crest or coat of arms, often alongside that of their spouse. They may also feature a family motto or the military status of the deceased.

Above: a close up detail of a funerary hatchment in our studio

Funerary hatchments are a continuation of a tradition that would display a knight’s helmet or shield following death, from the 17th century onwards it was custom to have this as a painting rather than a literal suit of arms. You will find funerary hatchments hanging as a lozenge, this is a square diamond shape. They may be an oil on canvas or panel, measuring around 4 ft square. Some hatchments are simply painted on a piece of fabric and pinned to a frame.

Above: examples of funerary hatchments

Funerary hatchments are typically found in parish churches, especially those with a connection to a wealthy family. They would have originally been displayed in the home of the deceased for six to twelve months before moving to the church permanently. Many may have since been lost, put into storage, destroyed, moved back to the family estate or placed in a local museum.

Funerary hatchment paintings usually feature two sides, known as the sinister (left) and dexter (right). The sinister side indicates the wife and the dexter side indicates the husband. You can tell who is living and who is deceased depending on the background colour of the crests, for example, a black sinister and a white dexter would mean the wife has died but the husband is still alive.

Above are two examples of funerary catchment arrangements. On the left we can see that the husband has died but his wife is still alive. On the right, the wife has died by the husband survives her.

If both sides are black, it shows that both husband and wife are now dead. Sometimes, if a husband had more than one wife in their lifetime, it may show that his first wife is dead (black taking up half of the sinister side with the family crest of the first wife) and his second wife is still alive (the other half of the sinister side having a white background to the family crest of the second wife). Sometimes there may be only one coat of arms with no mention of a spouse, in this case, the entire background will be black. To make things more complicated, some funerary hatchments feature the crests of numerous extended families or friends of the deceased. Below are some examples you may come across.

Above are two further examples of funerary hatchments you may come across. The left shows that both husband and wife are dead. The right shows that the husband and his first wife have died but he is survived by his second wife.

Unlike traditional oil paintings, funerary hatchments may not have been composed in a typical artist’s studio using professional materials. Many have been painted on calico or hessian and may lack the stretcher bars you would expect to see on artworks of this kind. The hatchment may be made up of various pieces of fabric sewn together, with the stitches weakening or the fabric shrinking over time. This may lead to an unstable, cracking paint layer, especially as the fibres expand and contract with atmospheric changes.

Above: abrasions and paint loss on the edges of a funerary hatchment

In some cases, funerary hatchments may never have been varnished, as their practical use saw them moving locations without thought given to the ongoing preservation of the paint. The lack of professional materials, an unstable surface and lack of varnish put funerary hatchments at high risk of continuous damage and deterioration.

Above: staining and paint loss on the surface of a funerary hatchment

Another risk factor is the age and location of the hatchment. These family pieces may have lost meaning over time and become lost in a church inventory or the storage of a manor house. Many have been on display in churches for so long that they have not moved or been properly assessed for damage in decades. This historic lack of care towards the painting further complicates and compels the weak condition.

Above: cracking and flaking paint on the surface of a funerary hatchment

Historic homes and churches usually lack climate control and have frequent use of candles or fireplaces, causing discolouration and further deterioration. Old buildings may have also had issues with leaks, floods or fires in the past. The recommended environment for an oil painting is 50% relative humidity and 21 degrees celsius, avoiding fluctuation is important to avoid constant movement of the fabric fibres or panel.

Above: paint loss on the side of a funerary hatchment

The restoration of a funerary hatchment usually consists of a surface clean (and varnish removal if applicable) as well as the consolidation of the paint layer and stabilisation of the materials. Due to their weak structure, a funerary hatchment may require a new lining – this is only conducted in cases that absolutely require it for ongoing safety and preservation. Tear repairs may also be required if the hatchment has become torn or punctured. Rusting and decaying metal tacks can be removed and replaced with a conservation-safe option. 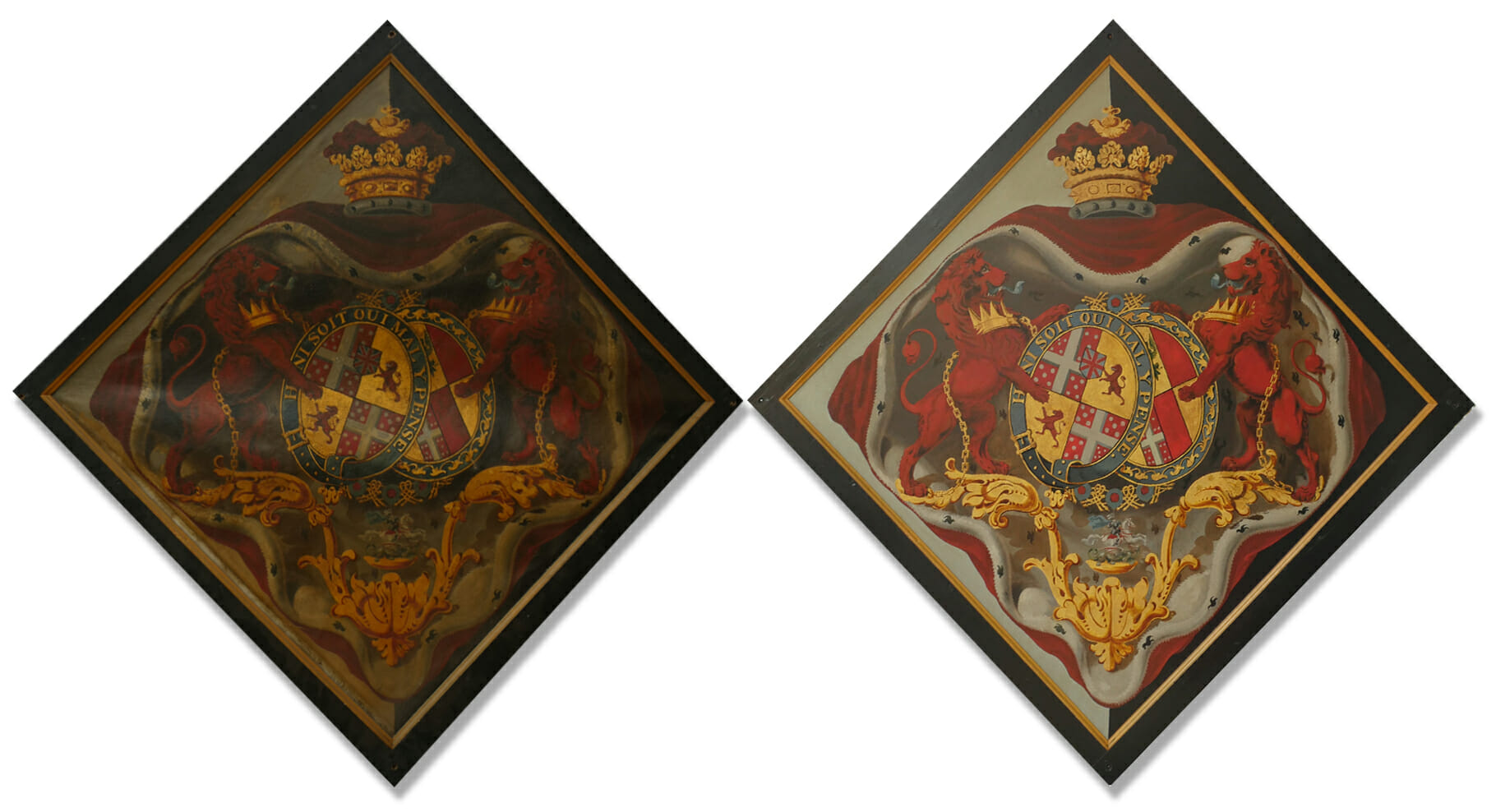 Above is an example of a funerary hatchment that was restored in our studio. Our conservators clean away the build-up of surface contamination with specialist solutions, tailored to the precise needs of the painting. Customising the solution is important in ensuring that the paint layer is preserved whilst the dirt is removed swab by swab, inches at a time so as not to move around the contaminants.

Above: details from the restoration of a funerary hatchment

Following restoration, our team can either return a hatchment to its original frame or provide a new option that is suitable for the era and style of the piece. Framing is important for the protection of these vulnerable artworks, as they give further stability. If an original frame is weak, our specialist frame conservators can restore and stabilise it to ensure the painting is returned to a safe display environment.

Above: a detail from a funerary hatchment part way through restoration

If you have a funerary hatchment or similar artwork in need of restoration or conservation, please get in touch with our helpful team. 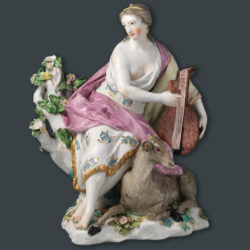 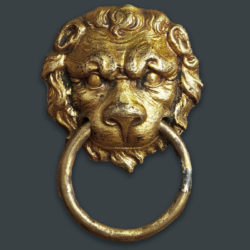 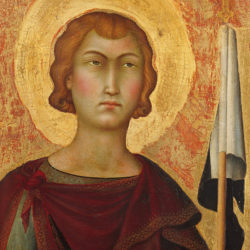 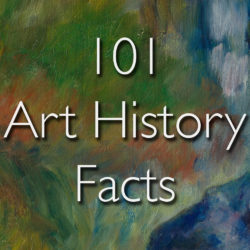 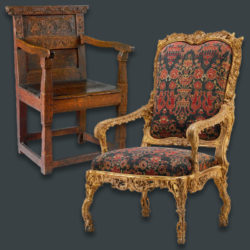 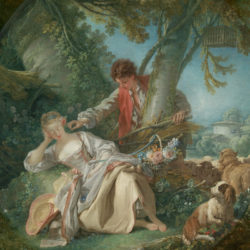