During the restoration process, our team often discovers areas that have been hidden for hundreds of years. These exciting discoveries sometimes include important details which could help strengthen the authenticity, such as a signature or typical style associated with a known artist. But most often they are the result of intriguing changes to the painting over the course of its life, whether this is a shift in societal sensibilities or political or religious upheaval. These stories may have otherwise been lost to time, or simply a matter of speculation, which is why it is a thrill to uncover the secrets beneath the paint.

We would like to share some of the great finds our team has made, as well exploring the reasons behind hidden features and how you might be able to spot them in your own artwork. 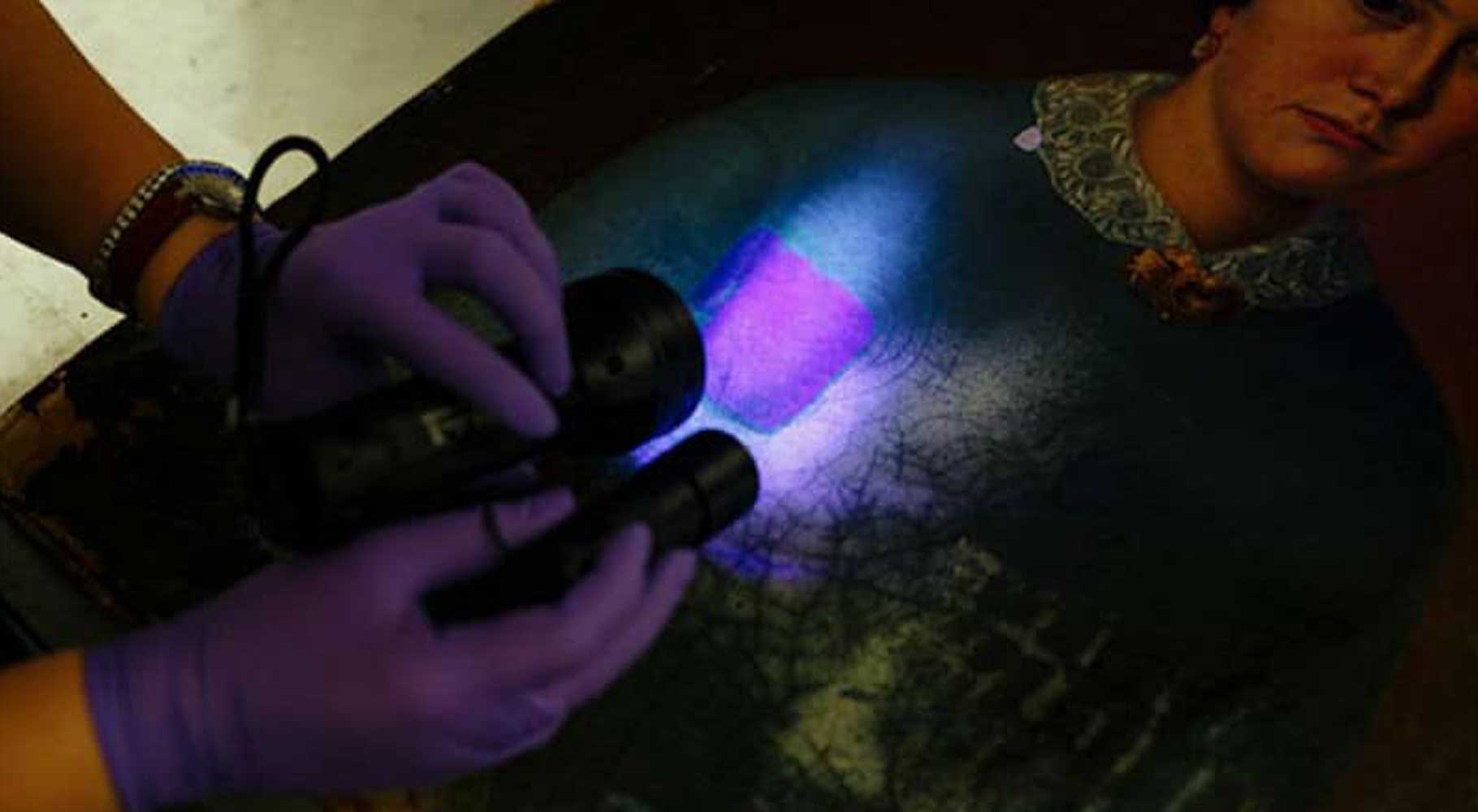 Why do some paintings have hidden features?

Over their lifetime a painting may have been over-painted for various reasons, blocking out or changing areas due to a change in fashion or morality. A clear example of this is in historic paintings featuring nudity or immodest dress. Victorian society may have found this inappropriate, so as to allow them to display it without blushed cheeks they often commissioned changes such as added drapery or fuller clothing. A superstitious owner may have also altered features such as serpents or skulls.

Portraits of influential figures such as Kings and Queens may have had their portraits adapted to represent more appropriate values, or disguised all together to avoid the political consequences of the owner housing a painting of a contentious or overthrown leader.

Religious paintings may have also been altered over time, either to hide, destroy, or change the domination, as was the case in reformation periods where an owner may have tried to hide their Catholic or Protestant beliefs. Whilst the authoritative faith may have taken art and purposefully recommissioned it to depict a more favourable religious theme.

Sometimes the reason for cover-up is far more simple. An artist may have either been unable to afford a new canvas, would like more room to study a subject, or has been unhappy with the original piece. Many canvas artworks may have drafts or entirely different paintings beneath them for economic reasons, or may even have paintings on the reverse of the canvas to make use of the space.

Hidden areas may also be due to environmental damage. The build-up of smoke, debris, dust, mould or extremely discoloured varnish may have led to such a high level of visual disturbance that the detail of the painting is no longer clear. This is particularly the case with artwork that has been exposed to an open fire or has been coated with unusually thick organic varnish in the past.

Across history, some owners may have painted over an artwork themselves as an artistic endeavour, or to try and restore the painting at home with amateur techniques. Today, professional conservators use synthetic pigments when they retouch a painting so that in the future another conservator will know that this is over-painting and not original to the artwork. This helps to maintain the historic and artistic integrity of the piece. Some historic or amateur attempts at restoration may not be as sympathetic, if this is the case our conservators can gently clear away and replace this repair and over-painting with modern and safe conservation methods if required.

How can I tell if my painting has a hidden feature?

Some areas may be raised or show a slightly different tone to the rest of the artwork, you may find that an area of over-painting is lumpy and not flat to the surface of the canvas like the rest of the work.

Over-painting from a different artist and period may have a different style entirely. You may be able to spot brushstrokes that seem to go against the rest of the composition or colours which do not quite match the original.

With areas hidden by environmental or varnish discolouration, a darkened canvas is always hiding the original colours and visual impact which the artist intended. On extremely discoloured paintings, entire features or subjects may be missing before restoration. Whilst it may be obvious on extremely discoloured paintings, some may have been yellowed or darkened for so long that the owner is used to them looking aged and shadowed in their composition. However, these artworks are often hiding bright tones and smaller details, including signatures, which have been lost for many years.

Conservators can find areas of overpainting using ultraviolet light which will show up any unoriginal paintwork. This type of overpainting will come away when the canvas undergoes a varnish removal, uncovering more of the original artwork. Over-painting which is not original to the artwork is often made up of a different medium, which makes it easy for a conservator to spot. Larger institutions and museums can use specialist scanning equipment to uncover layers beneath the oil paint.

A recent discovery in our studio uncovered a second portrait on the back of a canvas. The oil painting of a young boy had come in for cleaning and restoration work, on the back of the canvas was a study of a self-portrait by Joshua Reynolds from 1780. Reynolds was the first president of the Royal Academy and his self-portraits often take inspiration from Rembrandt. The second portrait was also restored and cleaned, ensuring both were well preserved.

A timely discovery on Halloween 2020 was the unveiling of a skull that had been covered up on a still life painting. This little feature was likely hidden due to a change in taste or the superstitions and religious sensibilities of a former owner.

When restoring an 18th-century portrait, our conservator uncovered the same face slightly altered behind the original. They believe the portrait may have been changed to give the female sitter more modest clothing. 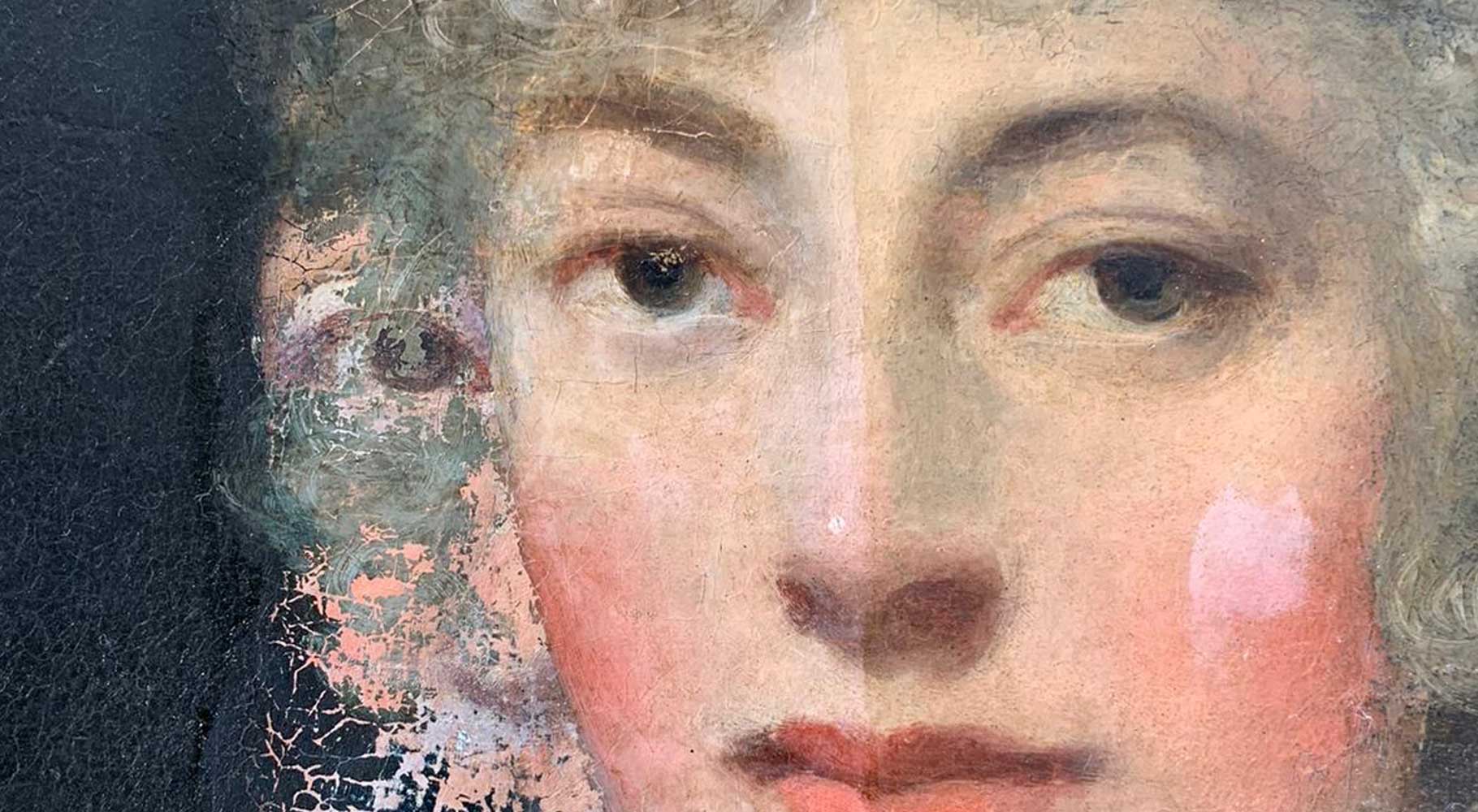 When working on a ceiling at Westonbirt School, our conservators restored a viper to the piece. Historically, the small reptile had been held in the beak of a bird in flight, but as the owner of the house lay dying in the room he ordered his servant to paint out this feature. Our team restored the detail to ensure the ceiling was in keeping with the original design, the plan for which is housed at the Victoria and Albert Museum.

Environmental damage to a painting had occurred due to a mixture of airborne contaminants such as fireplace smoke and unusually thick organic varnish. When our team restored the piece entirely new sections of the composition were revealed, as well as the original colours. 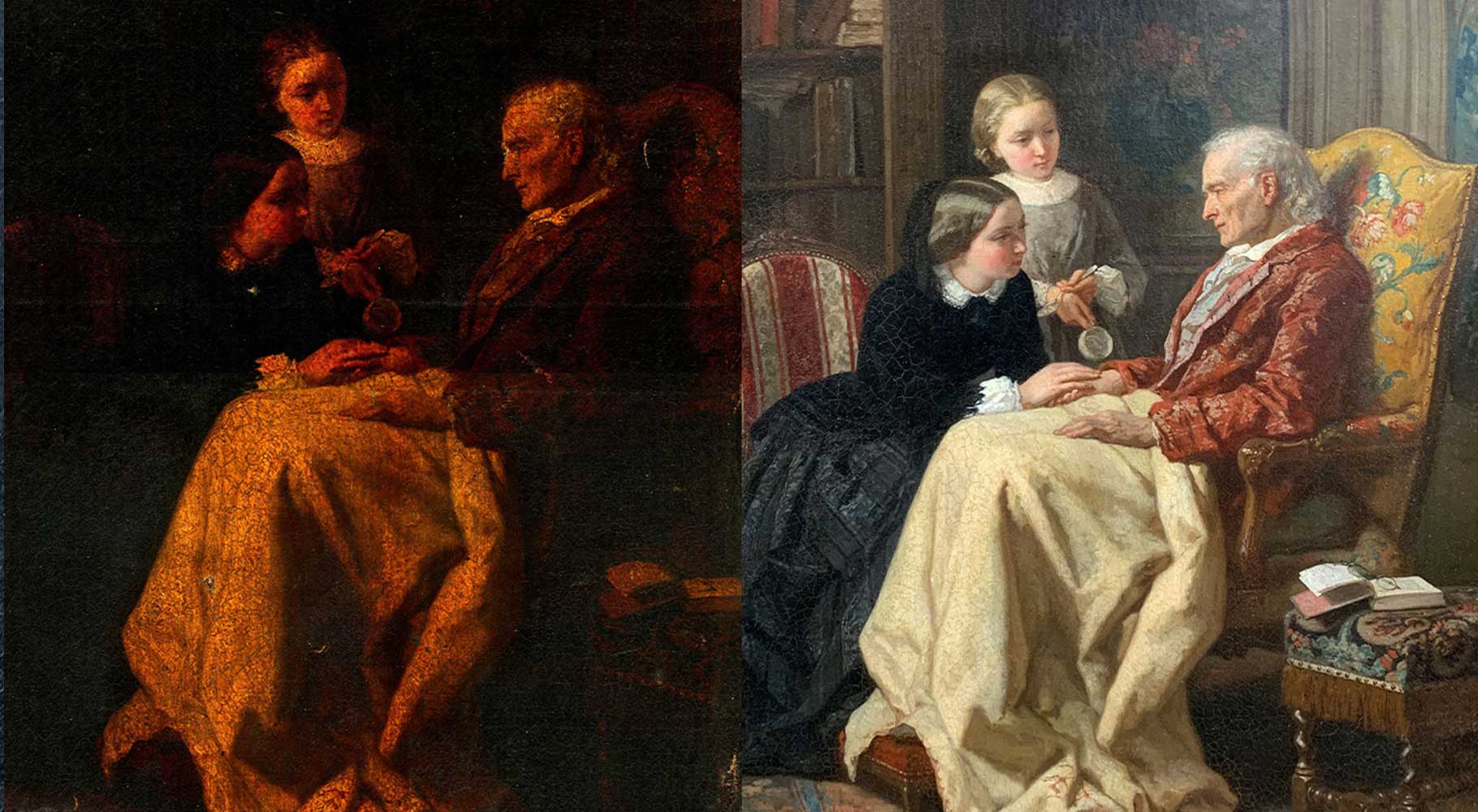 If you have a painting that you think may have a hidden feature, please contact our team to arrange an assessment by one of our trained conservators. You can get in touch via [email protected], telephone 0207 112 7576 or complete the form below