For 25 years, Neville Ferris drove the length and breadth of the country, collecting something so unique that it gained him recognition in an ever-growing, dedicated community. This labour of love allowed him to meet and befriend legends amongst those who shared his passion, whilst creating a piece of impressive memorabilia which celebrated hundreds of names who had created a galaxy far, far away…

At Fine Art Restoration Company we do not only protect oil paintings, ceramics, or traditional antiques. The devoted fanbase of collectors memorabilia continues to grow in size and influence within the art world. The connection of such specialist items to their owners makes them just as important in their need for professional conservation.

Memorabilia and collectibles may also have significant monetary value, holding their own space in auction houses around the globe. Some items may come straight from the film set, such as a complete R2D2 droid used in the first Star Wars, selling at auction for £2.1 million. Many more items from a vast array of movie merchandise can also hold tremendous value, with the sale of action figures and posters frequently surpassing their asking price due to the tremendous interest they bring to the bidding room.

In 2020, Neville faced a terrible act of vandalism which had torn away a large part of his 25 years of collecting.

The piece in question was a poster of Star Wars: A New Hope (1977), which after purchasing with the addition of just 11 signatures, had gone on to become his life’s work in sourcing and searching for the autographs of actors, crew members and production teams from the original sci-fi trilogy. Their names would end up covering the poster in gold and silver ink, each one a treasured memory of the day he met them.

Over the years, Neville would meet some of the most famous faces from this renowned franchise, often at conventions and special events. He would make friends with the likes of David Prowse (Darth Vader), Jeremy Bulloch (Boba Fett), and Kenny Baker (R2D2). Sharing drinks with them and hearing their stories from time on set, such as hearing about the time screen legend Alec Guinness (Obi-Wan ‘Old Ben’ Kenobi) came into the room without a clue about the films or the ‘space magic’ he was about to introduce to generations of fans. He was even taken backstage in a West End theatre to personally meet James Earl Jones (voice of Darth Vader), who graciously signed and socialised with him after a performance. 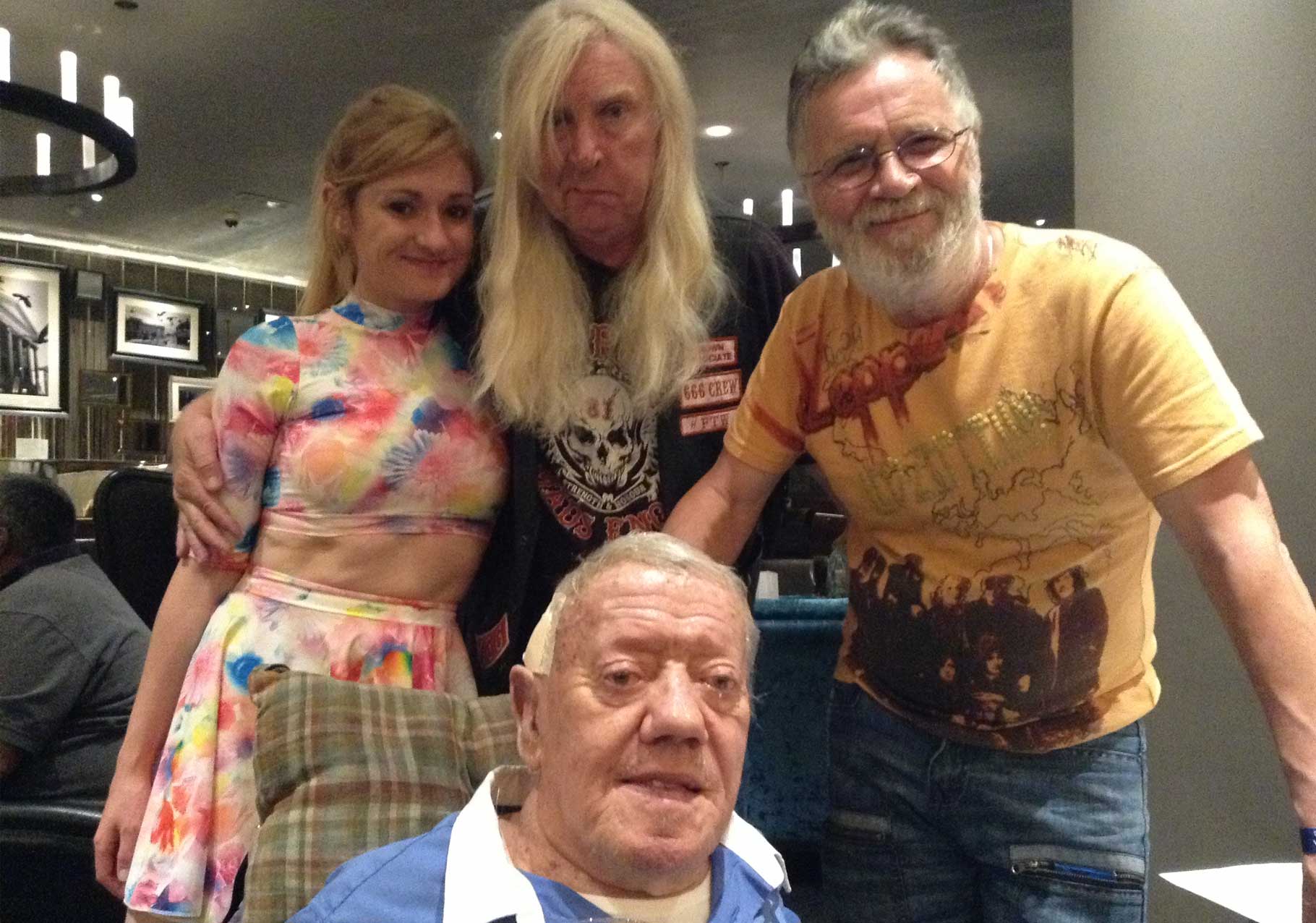 Neville (centre back) and his friends with Kenny Baker (front centre), who played the famous character of R2D2, a day before he passed away in 2016.

His poster also tells stories itself, in one area a leaking pen almost wiped out a section when he was getting it signed by Paul Blake, who had played the recognisable alien ‘Greedo’. As the ink ran, panic ensued and Jeremy Bulloch swooped in as quickly as his on screen persona of ‘Boba Fett’ would have done, blotting it up as not to spoil the collection. Neville joked “I think I’ll call this one Greedo’s comet” as the round smudge glimmered across the starry illustration. And so Paul Blake pointed an arrow towards the spill and claimed it as such in his own writing.

Some actors are harder to find than others, with Neville’s poster having more air miles than himself. After gaining 150 signatures, he still needed one of the most prominent. The central star of the franchise, Harrison Ford (Han Solo), does not attend conventions and is notoriously shy with fans, so Neville contacted an agency in Hollywood to help him.

They were able to obtain Mr Ford’s signature. But it was when the poster returned from the long journey and Neville removed it from the tube, that to his horror he noticed the bottom half of the poster was torn away and missing.

28 signatures had been lost, including those of Billy Dee Williams (Lando Calrissian), John Williams (renowned Hollywood composer) and the now-deceased Jeremy Bulloch, and Gary Kurtz (producer).

Neville believes it may have happened during its transit back to home, but we may never know the full story of why this part of the poster was completely missing or where it ended up. Devastated, he began searching online for any chance of help. Quickly, he came across us at Fine Art Restoration Company and immediately called our team, who were happy to be of assistance.

When works on paper, such as posters and prints, are slightly or completely torn apart, our expert paper conservator is able to slowly and precisely re-adhere the fibres back together with specialist techniques.

For this restoration, our ICON accredited paper conservator James was tasked with seamlessly connecting a digitally reproduced section of the poster with the original signed piece. The results were above and beyond what Neville thought was possible.

Now that he had a new section available from a donor poster in which he tracked down, our team helped him in carefully placing new signatures on the piece as they became available. Film music legend John Williams was one of the first to have his name reapplied to the restored poster, alongside older signatures of Alec Guinness and Peter Cushing.

Neville’s testimonial is as follows, true to form it was written in the style of his favourite films:

“NOT SUCH A LONG TIME AGO IN A PLACE FAR AWAY…

Dark forces were at work. The agents of the empire (custom officials) destroyed a poster of Star Wars signed by 150 actors whilst away for a signing!

Twenty-five years of work collecting these ruined! A large piece of the poster (with signatures) ripped off and missing forever in the voids of space!

With no droids to hand, I looked to the rebel alliance (FINE ART RESTORATION COMPANY LTD) for help.

They completely restored my poster to a finish that was just AMAZING adding new “cut” signatures.

The quality of the work is outstanding.

Many thanks to Princess Jenny, Princess Madalyn, Leo the driver (rebel pilot) and ALL the restorers.

MAY THE FORCE BE WITH YOU ALWAYS”

If you have a beloved piece of memorabilia which is damaged or deteriorating, we are happy to help in restoring these unique items and helping to preserve them for the future. Contact our team today via email [email protected] or call 0207 112 7576.