We frequently deal with fire-damaged artworks and it is entirely possible to treat paintings that have been affected by soot and smoke.

Our aim is to collect the artworks as quickly as possible, carry out the restoration work, and return them home when suitable to do so.

We’ve set out our steps to follow below so you know what to do if a fire happens. Our team is on hand throughout the process – from initial enquiry to restoration – and can offer support, advice and reassurance. If you have any questions about fire-damaged artworks, please do contact us for further advice. 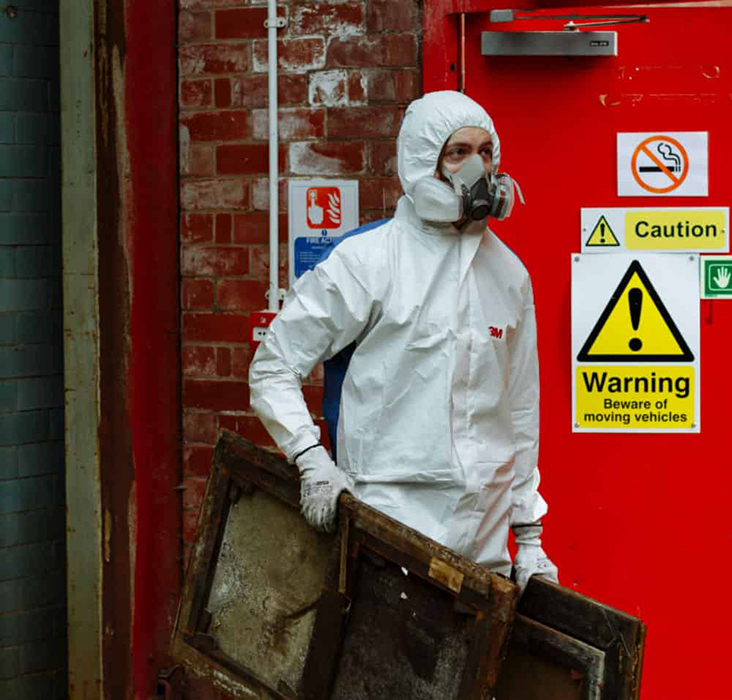 Leave the paintings where they are

As a first step, leave the paintings in the room they are already in. This is for a number of reasons. Depending on when the fire happened, they may still be hot to touch. We would also encourage as little movement as possible of the painting to avoid worsening its condition. Furthermore, if a painting was moved to an unaffected room, it would be easy for the smoke and soot particles to cling to surfaces and objects that were previously clean.

Do not touch the surface of the paintings

Whereas watercolours and works on paper are often glazed, oil paintings infrequently are. Avoid any contact with the surface of oil paintings; they should not be touched or wiped as this will cause the grinding of the particles into the painted surface and subsequent damage. Although this will be well intentioned, it would actually cause more harm than good and lead to further restoration.

Trying to paint over the surface in an effort to ‘re-colour’ the artwork should also not be attempted. Treating a painting that has suffered smoke or fire damage is specialist work, and the painting will benefit more by being left untouched. 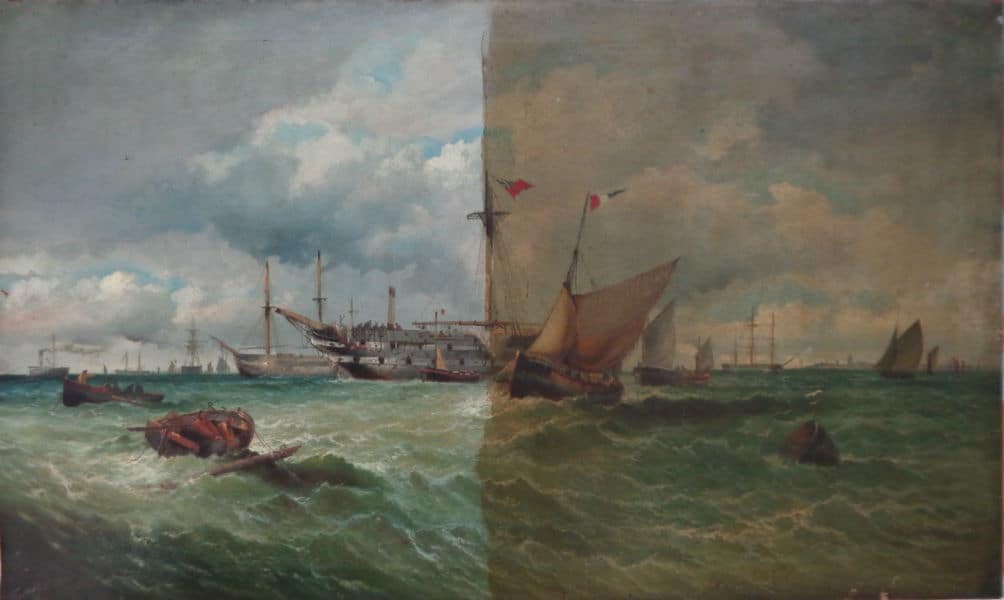 Contacting a conservator and site visits

When we first receive enquiries for smoke damaged paintings, as a matter of course we ask for photographs to be sent over so we can see the current condition of the artwork and obtain a visual reference. We will then speak with our client regarding either an on-site visit or studio assessment.

During an on-site visit, we will assess the condition of each affected piece, and we will then put together a condition report including each affected artwork, detailing our recommendations and giving individual quotes for each item. We can also advise which paintings need priority treatment. 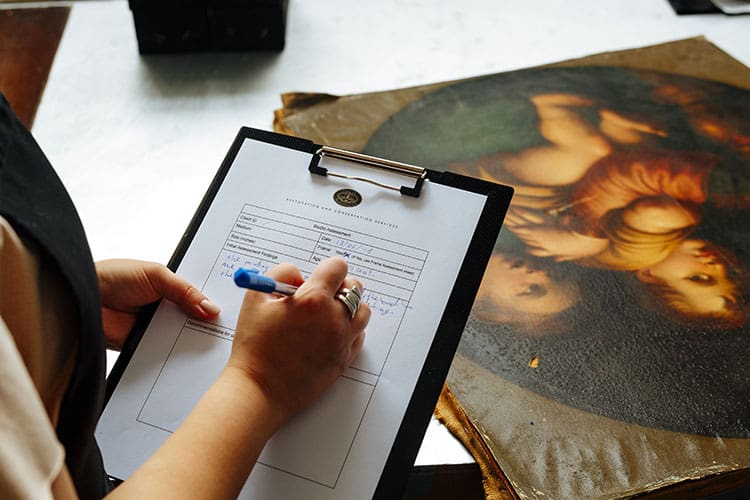 It is during this visit, that we will also start to understand the incident and scale of the occurrence. It may be the case for example that the true extent of the damage is not fully realised. For example, a fire may have been contained to one room in the house and has only affected one painting. On closer inspection however, it will likely be the case that several other artworks in the same room have also been contaminated with soot and smoke. Although these may not show significant signs of
visible damage, they would still require attention to eliminate the contamination and lingering odour.

It is also when we begin to understand the location of the incident that we can ascertain whether there will be damage in other rooms. This may seem unlikely, however for one recent site visit we complete, there were vents from the affected room that transferred the smoke and soot into other rooms. When tracking this route, we could see that artworks on paper were contaminated with soot and smoke, the smell of which was very much apparent.

Smoke or soot damage can be difficult to see on artworks, particularly if they are not directly impacted, if the incident was relatively recent, or the painting uses naturally dark pigments.

This claim resulted in many other paintings, works on paper, and specialist contents requiring care.

It is sometimes more practical for artworks to be removed from the scene. In such cases, we can wrap and safely transport all artworks back to our studio. We will then complete the assessments and send the condition report to our client. 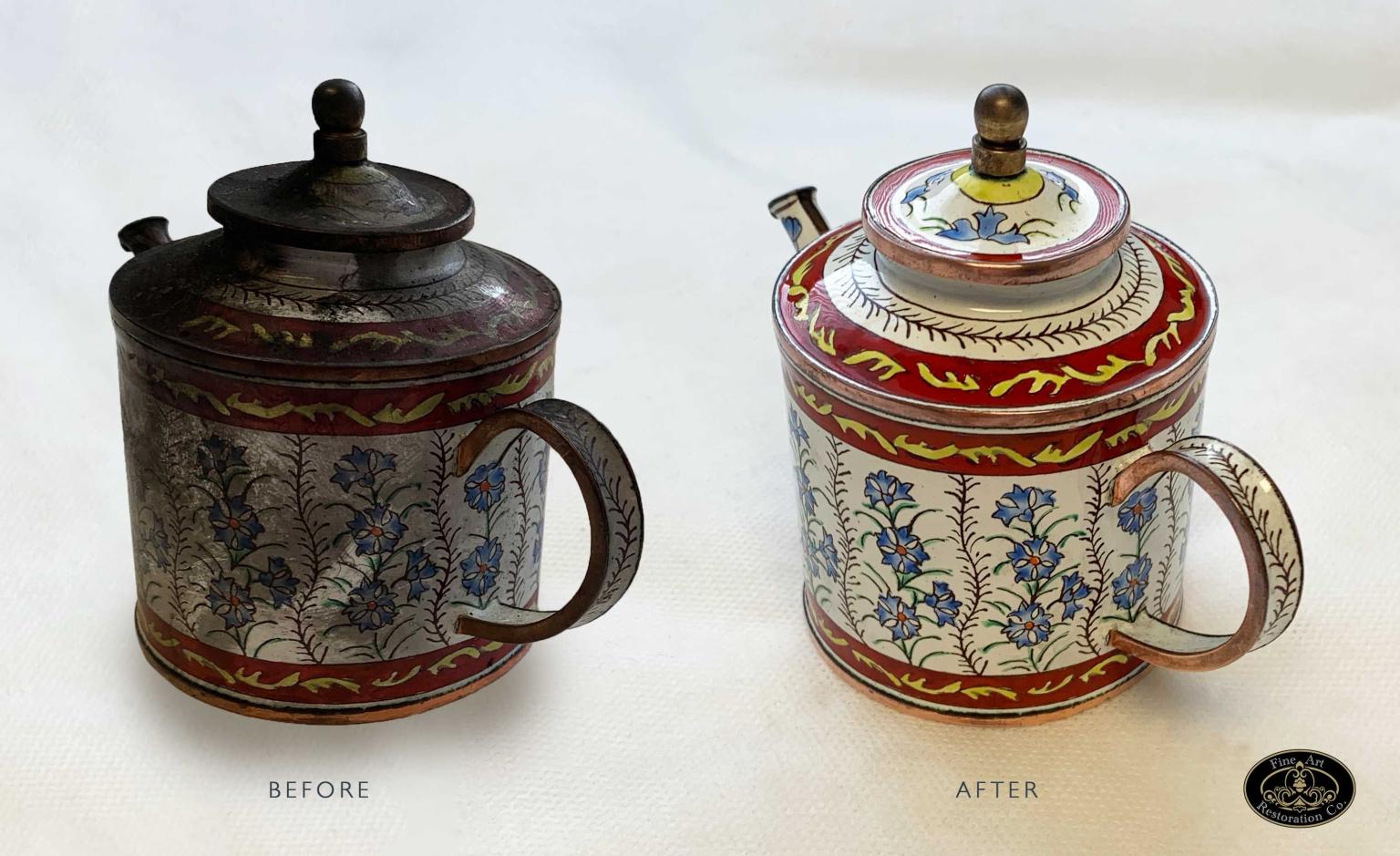 It is important to give the go ahead to restoration as soon as possible for fire damaged paintings. If left, the acidic nature of smoke and soot can affect artworks in various ways. For oil paintings, soot and smoke particles can embed into the varnish layer, causing a reaction and discolouration, resulting in issues going forward. For works on paper, it can cause discolouration over time. The odour is something that would not leave fully without proper treatment. If left untreated, it also risks the visual enjoyment of the artworks and potentially their assigned value.

Depending on the severity of the damage and how artworks have been affected, some will require light decontamination treatment only, while others will need more focused attention.

Our conservators are able to carefully remove the fine particles of soot without compromising the paint layer and then complete the clean of the painting.

The below photographs show a fire damaged painting before and after the restoration process. 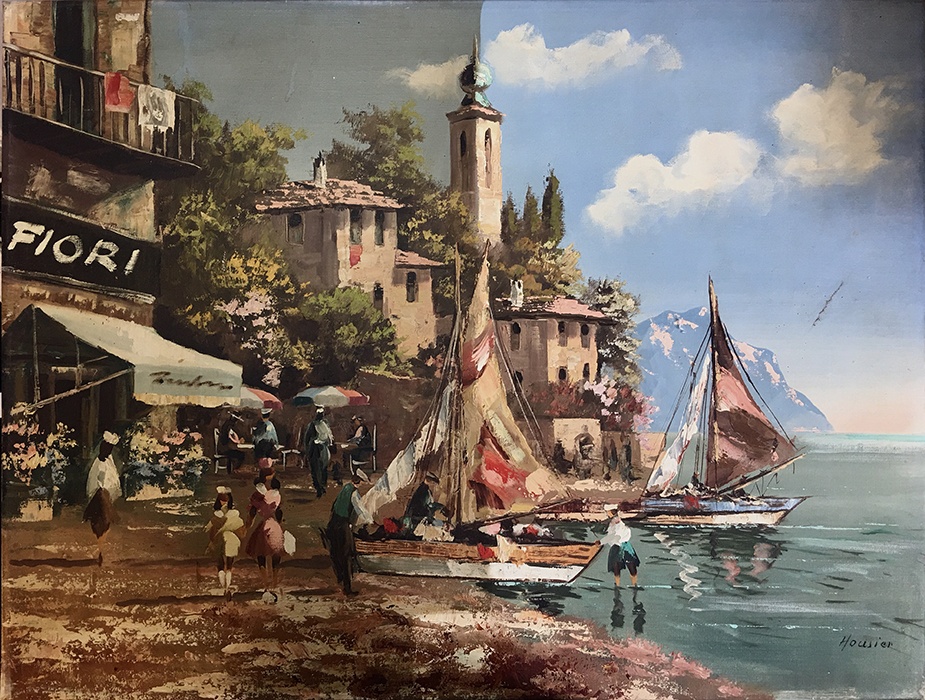 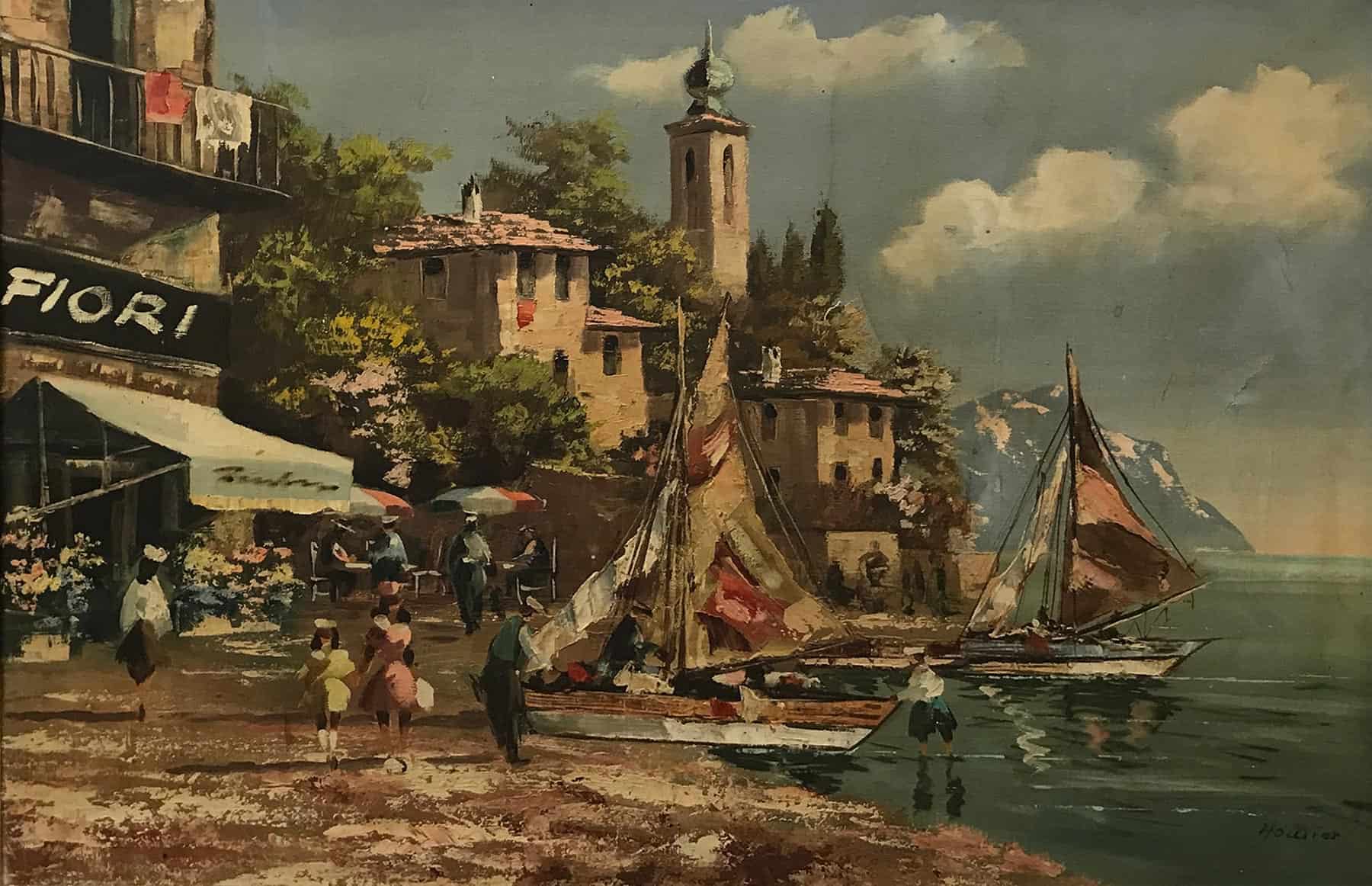 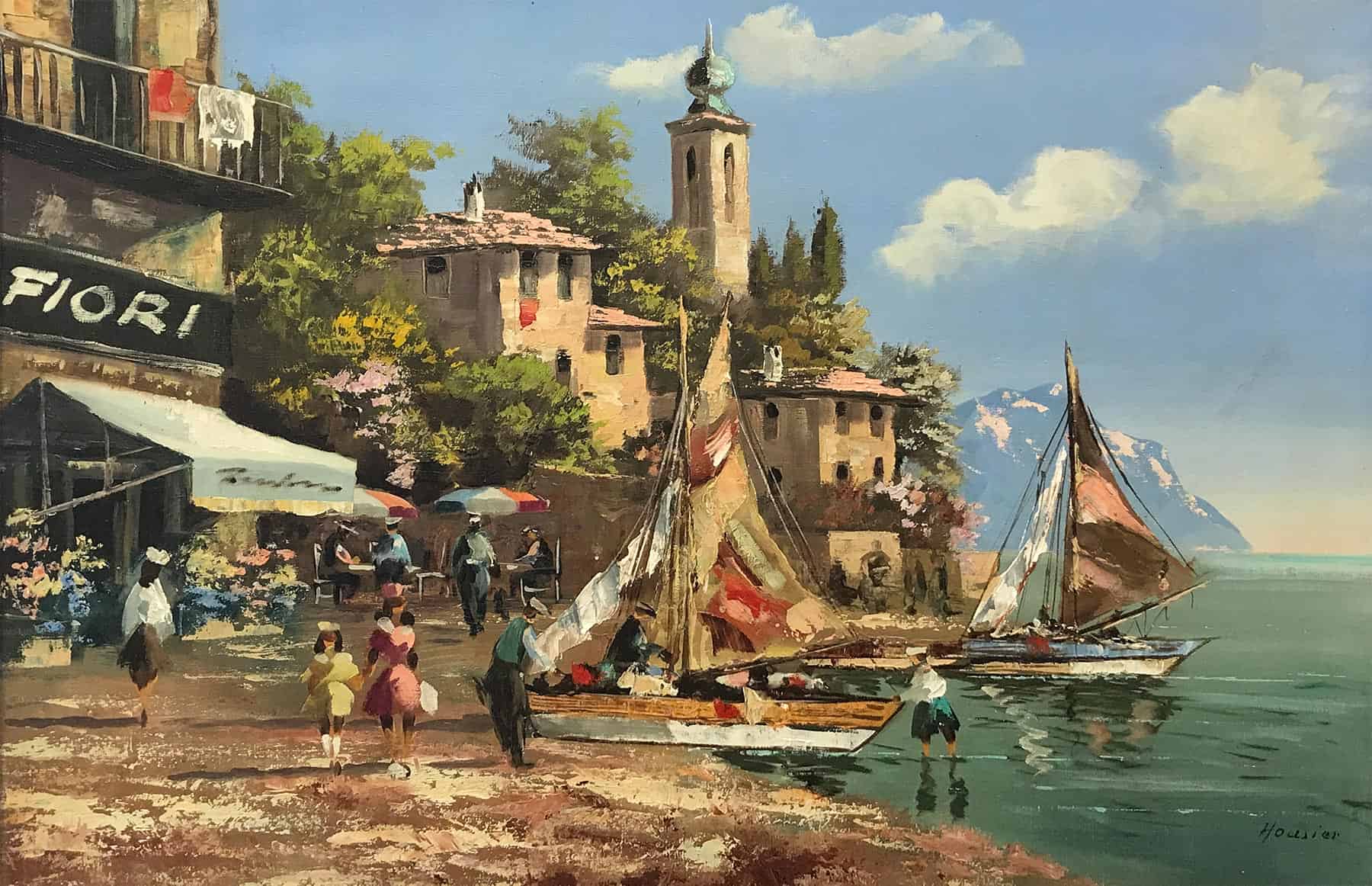 As well as the contamination of soot and smoke, paintings can also suffer from blistering, flaking, cracking, and warping of the stretcher bars, which can lead to tears and distortions.

We can successfully treat each of these issues, and complete the necessary structural work to ensure the painting is fully stabilised and strengthened.

If you would like our advice for a fire damaged painting please contact us for our no-obligation help.