When an oil painting becomes water damaged, its appearance can change dramatically. This was especially true for Mrs Pownall’s family painting after it was damaged by a flood through a ceiling, while being stored under a bed.

Before the water damage occurred, there was some discolouration on the sitter’s face, which can most likely be attributed to yellowing varnish. The significant damage caused by the water covered the perished varnish and caused the painting to be marked all over by mottled cloudy patches, recognisable as ‘blooming’.

Mrs Pownall entrusted her painting to our studio to treat the widespread water damage and return it to its original healthy condition. 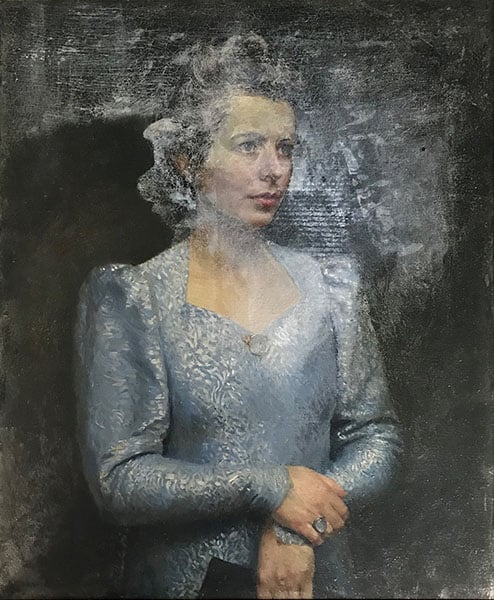 Once we had collected the painting, a thorough studio assessment inventoried the multiple areas of damage. It was evident that the water had spread across the whole of the painting, and the damage was particularly concentrated on the sitter’s face and upper half.

In place of a vibrant blue patterned dress, the surface was marked by a murky white.

While a varnish acts as protection for the paint layer, being exposed to water will eventually cause the varnish to be penetrated. The white stains are caused by the reaction of the varnish with the water, and is more commonly known as ‘blooming’. Once the varnish layer has been compromised, the paint is therefore exposed and at risk.

The painting was structurally sound, with no tears or holes. In some particularly severe cases of water damage, the wooden stretcher bars can swell and warp and cause distortions and tears in the canvas.

While studying the painting under UV light, our conservators uncovered overpaint that had been added at some point historically. While undertaking a cleaning test to determine the most appropriate solvents to clean the painting and remove the varnish layer, this became most evident around the left shoulder of the female sitter.

As it’s possible to see in the photographs below, while removing the area of varnish on the painting, overpaint is also being lifted from the shoulder. It appeared that this area of the painting was overpainted to alter where the shoulder was originally placed.

As part of the treatment to the painting, we could remove the overpaint, examine the condition of the paint layer underneath and fill and retouch any areas where necessary. 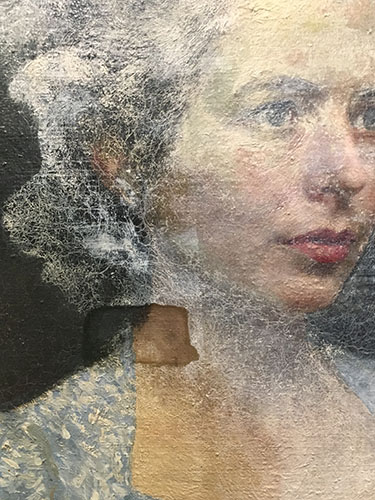 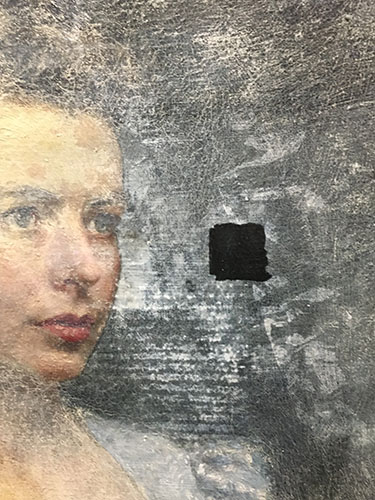 As the painting and stretcher bars were structurally intact and not in need of any repair or restoration, our conservators focused on the aesthetic aspect of the restoration.

Where the paint layer had become unstable due to the absorption of water, these areas were consolidated and fully stabilised. This measure was taken to prevent any lifting and subsequent flaking of the paint layer.

After completing the solvent test windows on the painting, it was clear that there was going to be a fantastic result from this stage of the process. The solvents used successfully lifted the surface dirt and contaminants that were present in the water.

To address the blooming, the solvents were used on the affected areas to lift the staining. Where it had seeped into the fine crack lines of the paint layer, they were carefully applied to gently and carefully counteract the blooming. 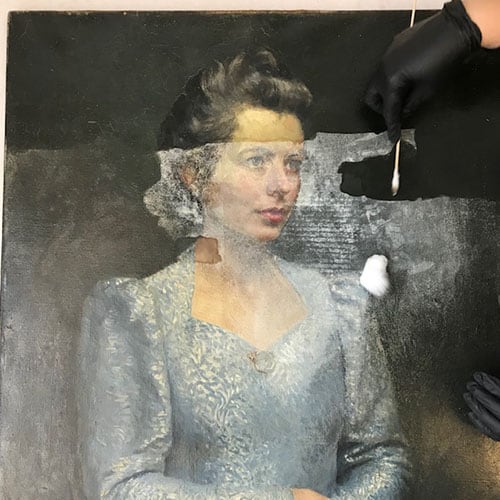 As a result of uncovering the original position of the shoulder after removing the varnish, some retouching was required. By matching against the original pigments, we carefully re-touched these areas. In the same way, we also retouched areas of the sitter’s face that had previously been overpainted, and were subsequently removed when the varnish was taken off. It looked to our conservators as if these layers had been ‘built up’ on the face, and they become very uneven and distinct in colour. 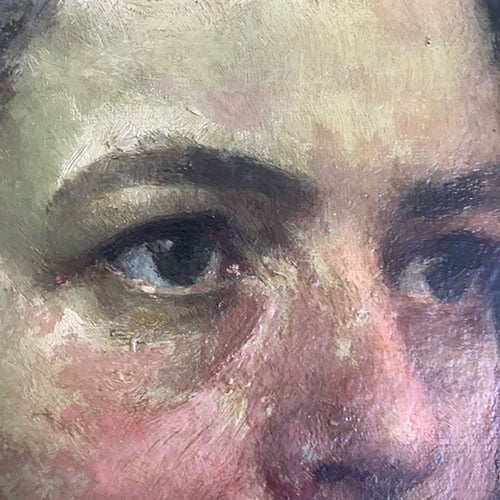 The finishing touch for the portrait was the application of a layer of varnish, to act as a protective guard against future intrusive dirt and dust.

We were delighted to be able to return the painting back to Mrs Pownall, so it can be proudly displayed at home. We were very grateful to receive a note of thanks from Mrs Pownall for a fantastic restoration. 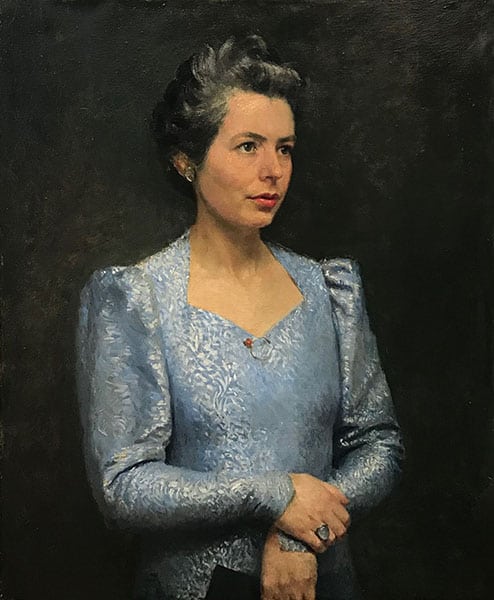 If you have a similar artwork that has suffered damage or needs a clean and would like us to take a look, please contact us for our obligation free recommendations and a quote. To know more about the signs of water damage, read our helpful article for more advice.