When Mr Stoddart’s painting first arrived in the studio, our conservators knew that something very special could be achieved through restoration.

The painting was inherited from Mr Stoddart’s father in law and had been hanging for some time on the wall above an open fire.

Due to the condition of the painting when it arrived, it was clear that it has had an interesting history. Our conservators delved into the restoration, and what followed has been a fascinating project to be involved in. 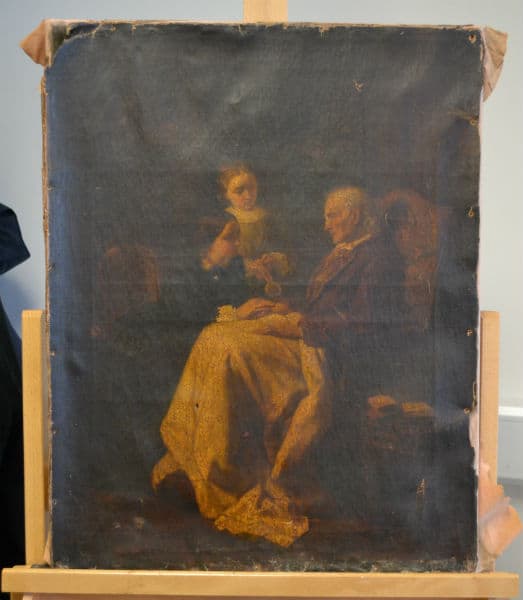 The first thing that became notable when Mr Stoddart’s painting arrived in the studio was the additional support it had been given at some point in its life. 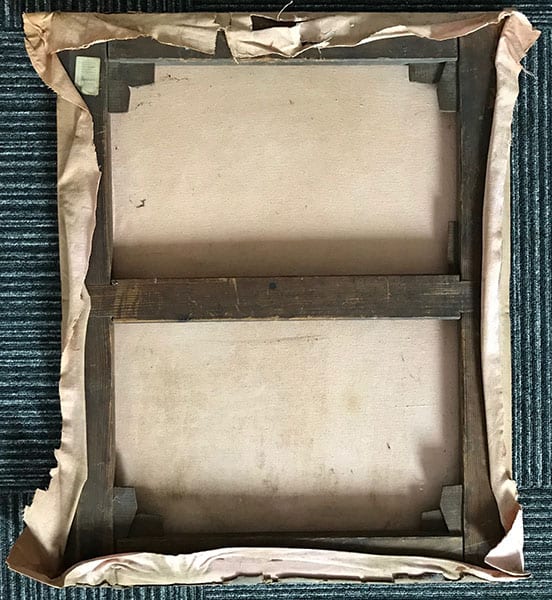 There were holes around all of the edges due to old pins or tacks, a puncture on the lower left of the painting and a tear. The top left corner of the painting was also missing.

One of the most striking aspects of the painting when we first looked at it in person was how discoloured and dirty it had become.

Knowing that the painting had been hanging above an open fire helped our understanding into what had contributed to its current appearance.

It was clear that the painting required significant structural work, so our first priority was to carefully remove the painting from the pillow case and subsequently detach from the stretcher.

The stretchers had glue residue remaining which was sanded down, and remaining residue on the back of the painting was mechanically removed with a scalpel.

Our conservators kept their attention focused on the structural repairs needed by completing a thread by thread tear repair. Due to the holes around the edges of the canvas and the missing top left section of the painting, lining would be required to provide much-needed support. In readiness for this, conservation weights were placed on the canvas and used to flatten the painting.

With the preparation for the next stage of the repairs underway, our conservators turned their attention to removing the unsightly discolouration and dirt from the painting.

While completing our usual solvent tests on the painting to find the most appropriate to complete surface cleaning and subsequent varnish removal, we made an interesting discovery.

The varnish was very thick and had darkened considerably, covering the painting in a brown/orange hue. It is possible that it was shellac applied on the painting, which was used as early as the 19th century.

Our conservators made excellent progress with the cleaning and varnish removal and the transformation is remarkable. 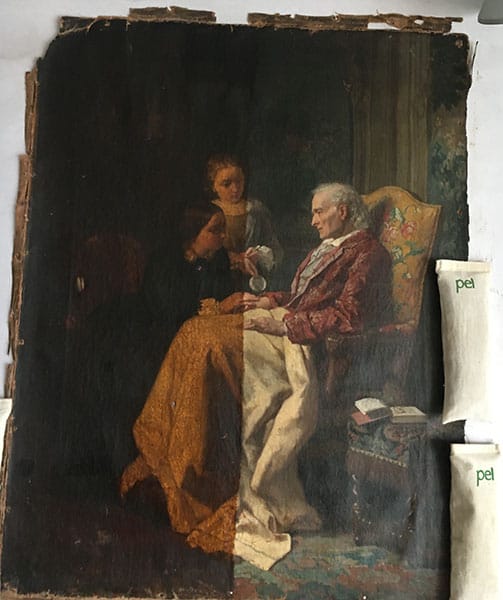 The painting had been obscured by the thick varnish and surface dirt. Once removed it revealed fantastic details about the painting, such as the glasses on the book at the bedside table, the patterns in the carpets, chair and wallpaper and the appearance of the bookcase.

Click the image below for a timelapse video showing the cleaning and varnish removal part of the process. 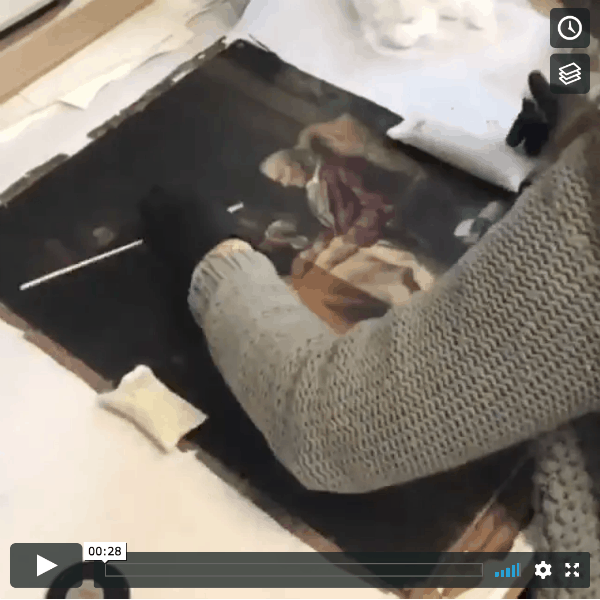 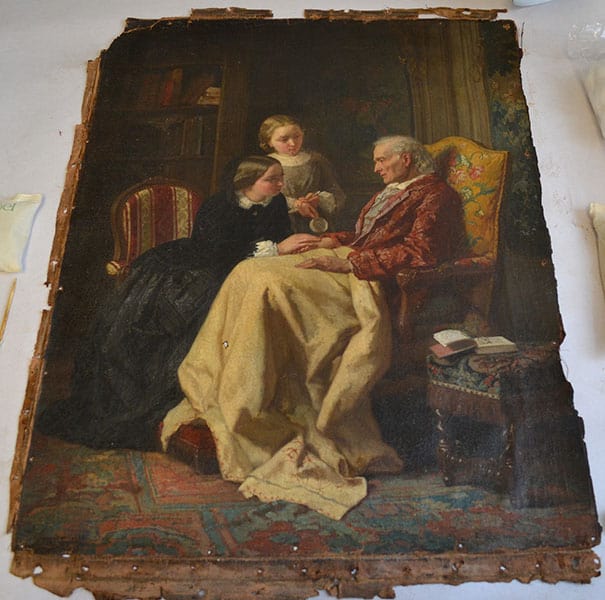 The cleaning and varnish removal also uncovered a signature and date on the bottom left of the painting, reading, ‘J Brayer, 1857’. Our client was delighted to be informed of this find, having no previous knowledge of the painting’s provenance. 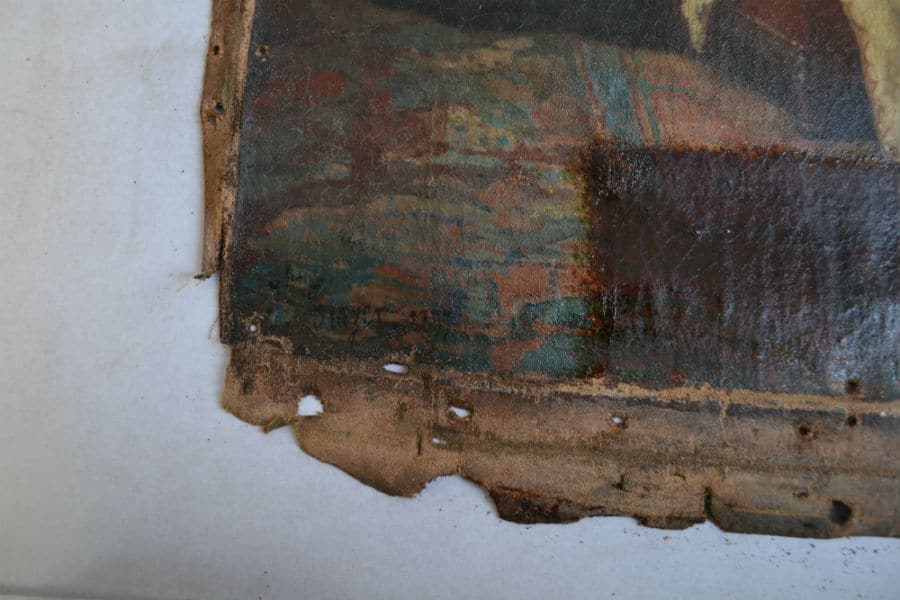 The uncovering of certain details of the painting also provided further credence that the painting depicts a Victorian domestic scene. The gentleman appears to be in a Georgian chair, and the lady is seated in a Victorian chair with regent stripes. Domestic genre painters, particularly female artists, were very popular during the time the painting has been created.

Following such a successful and insightful clean and varnish removal, we returned to providing the painting with the structural support it required through re-lining. This also allowed the painting to be re-stretched back onto its original stretchers. Through this step, the painting was comprehensively strengthened and secured.

With a new canvas added to the back of the existing, the missing area of original canvas at the top left of the painting could then be filled and retouched after sympathetic pigment matching against the original paint layer.

After re-varnishing, the painting was framed to provide a final last step in its journey to being fully protected and preserved for the future in Mr Stoddart’s home.

The artwork has become a very special painting to Mr Stoddart and his family, and we were delighted to hear that Mr Stoddart was thrilled with the results of the restoration. 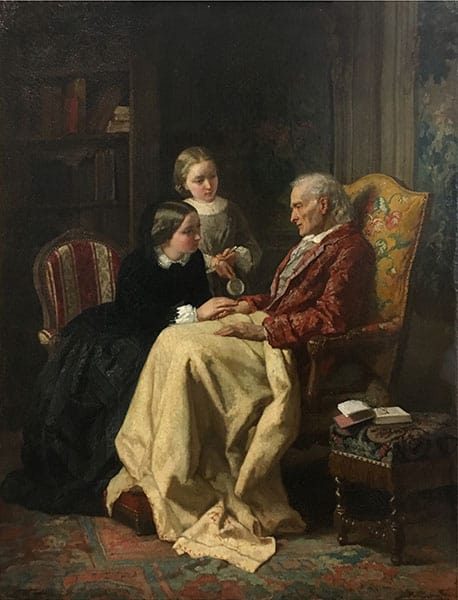 We were delighted to restore this special artwork, and preserve an important artwork for Mr Stoddart and his family.

If you have a painting requiring similar restoration, please contact us for our advice and recommendations.